It was an exhilarating day beginning with Mr. Sean Patrick Lovett speaking with us about the history of Vatican Radio and the way in which the Catholic Church continues to use  technology to spread the Gospel.  After the papal states were taken in 1870, Popes for the next 59 years were "prisoners of the Vatican," an area of 100 acres.  Living in this far from ideal reality and yet desirous of fulfilling the Lord’s mandate to teach all nations, Pope Pius XI sought out the Marquis Guglielmo Marconi.  The two would frequently walk in the Vatican Gardens discussing the opportunities which radio could mean for the world.  On February 12, 1931 Pius XI broadcast Christ’s message in Latin to the city and to the world for the first time!  Thus began Vatican Radio.  Soon after, Pope Pius XII used the radio as a vehicle to denounce racial hatred toward the Jews and the death camps of World War II.  After the war, it was used, among many other things, to help people find lost family members.

Today Vatican Radio broadcasts in 45 different languages around the world.  Mr. Lovett told us a moving story of an African refugee camp  where women and children (the men have either been killed or are fighting in wars) gather around a radio and listen to the Pope to find hope. When the Holy Father speaks to and of them, they "no longer feel invisible.”

Next we journeyed to the Jewish Synagogue of Rome and received further perspective on human history.  There has been a Jewish community in Rome even from 200 BC.  These first Jews came after the victories of Judas Maccabeus and lived peacefully in the city.  In the year 70 AD, the Romans destroyed the temple in Jerusalem and brought back its treasures and many of its people as slaves.  This is depicted on the Arch of Titus which we saw earlier on our tour of ancient Rome. The Jewish community living in Rome, however, purchased back their countrymen from the Romans and set them free. We learned of various times of persecution of the Roman Jews, sometimes sadly by the Catholic Church, right up through World War II.  Our Jewish guide concluded by telling of the historic moment in 1986 when Pope John Paul II visited the Synagogue and called the Jewish people, "our elder brothers."  This visit was follwed by a visit from Pope Benedict XVI.  They are now looking forward to a visit from Pope Francis in the future! 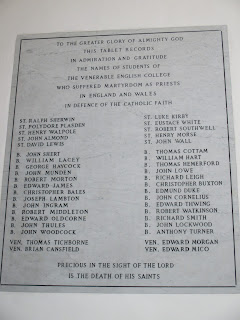 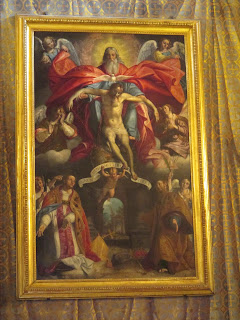 Two of the Sisters made a quick trip to deliver a package to the Venerable English College and were able to see this beautiful painting and a list honoring the priests who had attended this college and given their lives in martyrdom during the Reformation.
Posted by Unknown at 12:19 PM