The uniqueness and beauty of the Catholic Church come from striving for balance.  Balancing justice and mercy, truth and love, heaven and earth, virtue and reality, clearly not easy tasks, but very good. 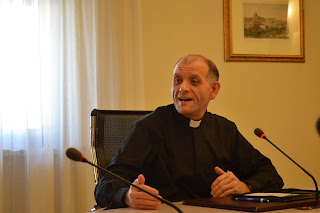 Father helped us deepen our understanding of the role of education in the global Church.  Not only did we come away with a greater appreciation of the contribution of our charisms within the Church, but we could each feel our vision broadening as Father spoke of the Church in China, and the importance of education of those in particular need.  As we listened and observed the audio equipment in front of each of us which is used for adlimina visits which included jacks for headphones so each participant could listen in his native language, we were reminded of the universality of the Catholic Church, which was expanding our hearts through her love and care for her people.


Speaking of balance…..yesterday when we were out after nearly getting run over by an electric car (we listen for cars coming behind us, but missed this one as it was absolutely silent), the driver stopped and spoke with one of our fearless Sister leaders.  Her first question was, “Will you accept a donation?”  Sister asked her if there was anything we could pray for?  Barbara said, “Please pray for my daughter, Alessandra who is giving birth tomorrow and my daughter Greta.”

“Anything for you?” Sister asked.

“No, just my children,” the mother replied, as she handed over a sizable donation.

So today we had a Danish and a cup of coffee, cappuccino or the like after Mass and tonight was a good night to slip out for a gelato.  Thank you very much, Barbara, we are praying for your children, along with the many requests of our sisters, families and benefactors.  Along the way to get gelato, one of the local Sisters pointed out some small gold plates embedded into the sidewalk along the way in front of a large set of residential doors.  She said, these plaques are in memory of Jewish people who were pulled out of this house by the Nazis.  The plates listed the names of seven people.  It appeared to be three married couples and the child of one couple.  The bottom line of each plate said “assassinated on ……..”  I don’t recall the exact date, but they were all the same.  (pause please)  Balance.  May the joy of the people of God be genuine and come easily, but never so much so that we forget our suffering brothers and sisters.  What a stark example of the little joys and immense sufferings of humanity.